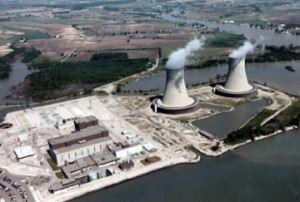 Fermi 2 has been designed to reduce the possibility of accidents that could harm the public. Systems are in place to automatically shut down the reactor is a problem develops. There are also a number of different ways to cool the reactor.

The Fermi 2 plant was built to and will operate under strict safety standards. The plant's construction, safety systems and operations are thoroughly checked by Detroit Edison and the Nuclear Regulatory Commission.

The plant controls a nuclear reaction in uranium fuel. The heat from this reaction turns water into steam. The steam turns a turbine to generate electricity.

An emergency at Fermi 2 is quite unlikely. Normally, there is no risk to plant employees or the public. But, emergency planning for communities near nuclear plants has proved helpful during other kinds of emergencies such as severe weather or chemical spills.

The Fermi 2 emergency plans are tested regularly. The Federal government requires a complete test of the plan each year. State and local personnel participate with Detroit Edison at least every two years. An ongoing training program for all emergency workers further ensures your safety.

Atoms are the building blocks of all material. If atoms contain excess energy, they are unstable. Materials that are composed of unstable atoms will naturally emit radiation in order to release the excess emergency and reach a stable state. The radiation is emitted in waves or particles of energy. Thus radiation can be defined as energy emitted from the nuclear of unstable atoms in the form of particles or waves.

Radiation is not new or limited to nuclear power plants. Each of us is exposed to some radiation every moment of our lives from radioactive materials that exist in nature.

Natural radiation is a by-product of processes and materials created when the earth was formed. The sun on which we all depend for heat and light produces very highly charged particles called cosmic rays. We are exposed continuously to this radiation every day. Not many people realize that we all have radiation sources within our bodies, usually in the form of potassium. Radioactive potassium occurs naturally in the earth and is therefore present in trace amounts in the food we eat and the water we drink. Additionally, radioactivity from uranium and thorium is found in rocks and soil. For example, radon gas is a source of radiation that results from the decay of uranium found in the earth. Radon gas has recently been identified as a concern because it can penetrate through the foundation of homes. Recent studies show that radon gas contributes more than half of our radiation exposure each year.

Our environment contains many sources of radiation. Some of these sources are natural in origin, either originating from the sun or from radioactive materials that have resided in the earth since its formation. Other sources are man-made. X-ray machines are used for dental and medical purposes, television sets are used for entertainment and microwave ovens are used to cook foods. Nuclear power plants use the energy of radiation to convert water to steam, which is then used to generate electricity.

People living near Fermi 2 receive less than one millirem a year due to the plant's operation. This compares to the 360 millirem of exposure received annually from natural background radiation and other man-made sources.

Since every living thing on earth has been continuously exposed to radiation, such exposure is normal. The level of exposure from natural radiation and man-made sources is considered very low-level exposure. Scientists continue to study the risks associated with low-level radiation exposure to determine its effects on humans. The studies show that negative health effects caused by low-level exposures cannot be distinguished from those caused by other environmental hazards. After more than 80 years of study, radiation is readily detected, understood and strictly regulated.

A ten-mile area around Fermi 2 Power Plant has been set up as an Emergency Planning Zone (EPZ). It is required by both the Nuclear Regulatory Commission (NRC) and the Federal Emergency Management Agency (FEMA).

The areas in Monroe County covered by the EPZ include:

In Wayne County, areas in the EPZ include:

A map of these areas is available from the Monroe County Emergency Management Division.

Emergency Classifications You Should Know

There are four classifications for a nuclear emergency. They are explained in the order of their seriousness to help you understand their meaning:

The least serious of the four classifications. It means there is a minor problem at the plant. The Nuclear Regulatory Commission (NRC), state and local agencies are notified. Because of strict federal regulations, a number of problems are reported as unusual events even though they pose no danger to the public. No action on your part is necessary

This is an event which could reduce the plant's level of safety. There would be no danger to the public and you would not be required to take any action. Federal, state and local officials are notified. County and state officials and Detroit Edison would activate emergency operations centers at the plant site.

A more serious accident has occurred at the plant. Radiation could be released from the plant but at low levels which do not require you to take any action. Federal, state and local officials are notified. The state will recommend that farmers place milk-producing animals within two-miles of the plant on stored feed.

The most serious of the four classifications. A large amount of radioactive material is being or could be released from the plant into the environment. Federal, state, local and Detroit Edison officials would take actions to protect the public. EAS stations would broadcast information and instructions. Please follow those directions closely for your safety.

Boiling Water Reactor - A nuclear power reactor cooled and moderated by water, which is allowed to boil in the core to generate steam that passes directly to the turbine. Fermi 2 has a boiling water reactor.

Congregate Care Center - A designated location at which housing and food are provided for people who have been evacuated.

Decontamination - The controlled removal of radioactive material from places or things where it does not belong.

Emergency Operations Center - A place where state and local government officials manage response to an emergency.

Emergency Planning Zone (EPZ) - An area surrounding a nuclear plant site for which planning has been done to assure prompt and effective protection of the public in the event of a potential or actual release of radioactivity.

Joint Public Information Center - The place where news reporters receive official information on a nuclear plant accident from government and utility officials. For Fermi 2 this is located at the Monroe Community College. Rumor control responses are also provided to the public by telephone.

Millirem - A unit used to measure radiation dose. It is 1/1000th of a rem (Roentgen Equivalent Man).

Protective Actions - Emergency measures such as sheltering or evacuation that are taken to prevent or minimize radiation exposure.

Radiation - Energy in the form of rays or particles which is given off by radioactive materials.

Reception Centers - A designated location for receiving evacuees, including registration, first aid and assignment to a Congregate Care Center or medical facility.