Women's Suffrage Panels in celebration of 100 years of the woman vote, and the ancient fish of these parts, the Sturgeon. Easy to read, and informative for everyone.

Opened in conjunction with the county of Monroe's 200th anniversary is the 200 Objects exhibit - some never on display before! From early to recent Monroe history, we've got something for everyone, highlighted by the glowing neon "Monroe" marquee sign from the Monroe Theatre of the not-so distant past. A celebration of Monroe's material culture.

Many important people and events in Michigan's move to statehood are related to Monroe County's history. Monroe was formerly known as 'Frenchtown' for its first white inhabitants, the French Canadians who established their farms in long 'ribbons' along the Riviere aux Raisin (the River of Grapes, the River Raisin) and the other creeks and shoreline of Lake Erie. In our local Map Room, visitors can start with this drawing of Michigan territory from 1777, find the ribbon farms of 1810, the growing development of the county in 1859, and George Lang's famous 1901 Plat Map. Also included are 2 'Bird's Eye' Monroe City views, and a map that looks like an artist's sketch, but is actually a correct detailed map of the city. Every time you view these historical documents, you'll see something you didn't notice before!

A potential civil war was barely averted in Monroe County during the Toledo War of 1835, in which Michigan lost Toledo, but gained the Upper Peninsula. Michigan's earliest railroads and financial institutions sprang up here shortly after the Erie Canal opened Michigan and the West to commerce and industry. It's easy to trace those decades of development by comparing the 1859 and 1876 township maps. 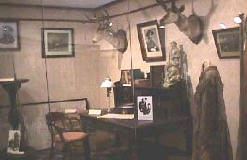 Housed on the second floor of the Monroe County Historical Museum is one of the nation's largest public exhibitions about General George Armstrong Custer. Custer was born in Ohio, but attended school in Monroe and married Elizabeth "Libbie' Bacon, the only daughter of a prominent local judge. The Bacon homestead once stood on the site of the current Museum.

The exhibit traces General Custer's genealogy and birth, his association with Monroe, his West Point experience, his Civil War victories, and his ultimate demise at the Little Big Horn. Custer's interests in outdoor life, travel, target shooting, hunting, and taxidermy are highlighted.

The effect of Custer and his legend can be seen in displays showing the efforts of Civil War veterans to memorialize him and through the life and works of his beautiful widow, who remained steadfast to his memory until her death at age 91. The rest of the Custer family is not forgotten, as they have remained a fixture among Monroe's military families until after World War II.

Victoriana of the Stanley Newton Room

Superb examples of Victorian furniture, glass, decorative arts, and clothing can be seen in the museum's extensive holdings. Much hardship was endured in transporting some of the early furniture pieces to this area. Monroe prospered through the entire Victorian period, 1837 to 1901, and many treasured items have been donated to our museum over the years.

Unique pieces of furniture made in Monroe are part of the display. Portraits, landscapes, and still-lifes done by local artists grace the walls of the Victorian room. 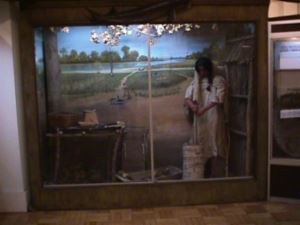 Monroe County has a rich heritage of Native American Woodland lore. More historic and prehistoric archaeological sites are registered in Monroe County than in any other county in Michigan. The featured display shows corn meal production, which is one of the oldest original displays of the museum

Museum exhibits focus on the Paleolithic through the Late Contact Period including items from tribes associated historically with Monroe, Woodland tribes such as the Potawatomie, Odawa, Wyandot, and Ojibwa. Featured are a dugout canoe (circa 1840) and a reproduction birch bark canoe, as well as a beautiful beaded papoose carrier used by a local metis family.

Exhibits display a significant collection of authentic 18th Century items from our earliest European settlers. These were mainly French-Canadians coming from the Detroit-Windsor region. They named the River Raisin after the abundance of grapevines that grew along its banks. Grapevines still grow along its banks today.

Their pioneer lifestyle fostered a tradition of freedom and outdoor life common to market hunters, decoy carvers, trappers, and fishermen. Many of the French surnames can still be found in Monroe County, and traces of their culture remain in roads, streets, and waterways.

Frenchtown was almost destroyed during the War of 1812, and the habitants would have starved without the muskrat as a source of food. Our "Muskrat" tradition lives on today, in cuisine and story.