History of the Jail

The whipping post was one of the institutions under the territorial law in Michigan and Monroe made use of it to some extent in dealing with "undesirable citizens ". It proved quite effectual in banishing rogues, even if it did not reclaim them. An instance of thoroughly applying the remedy to evil-doers, was the case of one Thiebault, who was whipped at the "town pump" which stood at the northeast corner of the public square nearly in front of the present location of the Presbyterian church which was then the location of the court house. He had committed a larceny of merchandise at Henry Disbrow 's store, (afterwards James McBride 's saddlery and harness shop).

It was not creditable to the territory that public whipping was allowed to be inflicted on Indians, negroes and others convicted of various small offenses by the order of a simple justice. The not less barbarous custom of selling paupers to the highest bidder, along with the disgusting spectacle of the ball-and-chain gang were not abandoned until 1835, when this relic of barbarism was forever done away with in Michigan.

The first jail was located in the old yellow court house which stood on the public square. The second story was used for the court. The east part of the first story served as the residence of the jailer and the west part was for the jail. It had a small space in the rear surrounded by a stockade that served as a yard for the prisoners.

It was in front of this building the whipping post was located where criminals were sentenced to be lashed.

The old stone jail was built in 1840. It was located in the southeast part of the city of Monroe on the Isadore Navarre Platt; namely, the northeast corner of Navarre and Fifth streets.

This jail was built in 1892 on the location now occupied by the County Annex Building. Its cost including the Sheriff's residence was $8,770. At the rear of the building was the kitchen. The cook, usually the Sheriff's wife, prepared the meals for the inmates. The jail cellblock held 16 men. They slept on bunks in an iron cage, in the center of the room. The jail also had two cells for women an a padded cell. 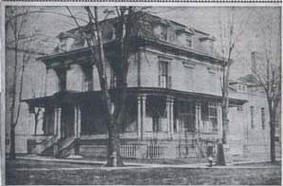 The jail was given an unfavorable report by the "County Jail Inspection Committee " in 1896. It was finally condemned by the "State Welfare Commission" for its "lack of sanitation. " It was torn down in December, 1930, by a governor 's order.

The fourth jail was built behind the third jail on the site of the present County Annex Building. It was constructed in 1931 at a cost of $46,000. It was affectionately known as "Harrington 's Hotel" in respect to Sheriff Charles G. Harrington.

In 1959, a $113,000 addition was completed in which the second floor housing was finished and the jail entrance was extended south to become flush with the courthouse.

In 1961, work in the basement was completed adding more space there and making it possible to open the fire control and booking portion and new holding cells. The jail remained that way for the next twenty years.

On October 14, 1981, almost exactly fifty years after its opening, prisoners were transferred from the old jail to the present jail. The old jail was torn down in 1982.

The fifth Monroe County jail was built across from the fourth jail on Second Street facing north, in 1981. The cost of the project was over 11 million dollars. An enclosed catwalk was erected between the jail and the courthouse, connecting the third floors of each building. This bridge is how the inmates are moved back and forth from the jail to the courthouse for court appearances. When built, the jail was to house 127 inmates, including 24 cells to handle the female population of the jail. When the jail opened, 68 inmates were transferred over from the other jail. As time passed and the population of the jail increased, it became apparent that the jail was becoming overcrowded. As a temporary solution to the overcrowding, the County decided to house inmates at other County Facilities. The County was soon paying $500,000 a year for the housing out of inmates.

In the spring of 1997, the Sheriff was able to obtain a grant from the State of Michigan for 111,000. The grant was used to double-bunk some of the cells. The double-bunking enabled the jail to house 183 inmates. Still the jail remained overcrowded and a more permanent solution was needed. The County, the Sheriff and the other county officials enlisted the help from many sources in and outside the County to help find a solution to the jail overcrowding. It was decided that a sixth jail would be built for minimum-security prisoners. The present jail would be kept in operation to house the more serious offenders.

In June 1999, Monroe County purchased 155 acres of land on East Dunbar Road, Monroe Township for the construction of a new and larger jail. Future growth and needs of the Monroe County Sheriff's Office were taken into consideration when the land was purchased. Due to cost restraints and immediate jail needs, it was decided that the new jail would be built in phases to accommodate the future growth of the jail population.